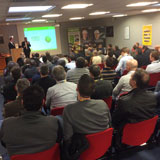 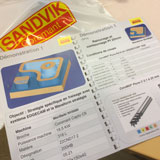 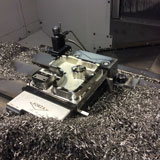 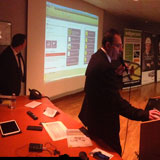 Over 200 delegates at Sandvik and EDGECAM’s first joint manufacturers’ event in France were shown live demonstrations of EDGECAM’s Waveform roughing strategy, which has been described as revolutionary in the French metal cutting market.

The two-day “Art Of Milling” event at Sandvik’s plant in Orleans, included demonstrations of milling and turning, but according to Antonio Parisse, EDGECAM France Sales Manager, there was no doubt about the highlight. “Delegates were captivated by how powerful and unique the Waveform process is.”

And EDGECAM’s Strategic Partnership Manager, Wesley Tonks, says: “Judging from everyone’s reactions to Waveform, we’d introduced something revolutionary, in how the strategy improves standard roughing cycles by removing a constant volume of material.”

The Waveform process involves cutting along as much of the flute length as possible, distributing wear evenly, rather than just at the tip. The radial cut depth is also reduced to ensure a consistent cutting force, allowing cut material to escape from the flutes, meaning tool life is extended even further as most of the heat is removed from the chip.